With its upholstered sleeping berths, a dining car with wide tables, picture windows and white tables clothes, a glassed-in observation car and an historic route with stops at evocatively-named locales like the Mojave Desert, Canyon Diablo and Dodge City, one expects to meet passengers on Amtrak’s Southwest Chief of a certain elegance and sophistication. At least a cut above the folks crammed into an airliner, were they can get across the county for $500, not the $1300 I paid to get from Los Angeles to Boston this February. But there was not an ascot to be seen or even a pair of pressed pants or a tucked-in shirt. Just about everyone came dressed for a shopping trip to Walmart, except for at least a dozen Amish couples, the men in shaggy chin beards and baggy shirts, the women in starched bonnets and long, drab dresses.

At dinner on the first night, I sat next to George, an elderly man in a gray sweatshirt, and across from an Amish couple, Dave and Martha. The couple had picked up a train in San Diego and then the Chief in LA. They had come out from Ohio, Dave said, “To get my wife worked over in Tijuana.”

Amish humor, with a kind of sexual innuendo. Not what I expected; maybe the Amish are changing. So I let out a little laugh.

I wished I hadn’t laughed.

Martha spent a lot of effort on her steak dinner (they both ordered the steak well done), eating her salad at first with her fingers and then slicing her roll down the middle, made a butter-and-steak sandwich with it, wrapped it in a napkin and took it with her.

George, a retired music teacher from Rockford, Ill., did not bother to avoid stating the obvious: “You’re Amish, right?”

Dave was very matter of fact — probably got this question a lot, people who looked at them as a foreign specimen that they could examine. I heard a man across the aisle from me at breakfast who never took off his baseball cap question the young Amish man at his table endlessly about his work and his clothes and his hair, the young man answering everything with great patience. 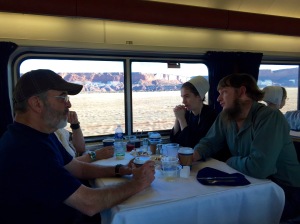 Dave did the same thing for George, describing how he used a diesel generator for his woodworking shop and smiled wryly about what would happen if his area lost power. “Yup, I’d be able to keep making my furniture, but if there’s no electricity for everyone else, then they aren’t going to be interested in buying my furniture.” He seemed to be saying, hey, don’t think we’re all that independent from the outside world

Dave and Martha skipped dessert and left no tip, leaving me sitting next to George, who ate his Salisbury steak at a glacial pace while he told me about his old friend who was such an accomplished trombone player that he played for decades with the Boston Pops and Boston Symphony, prompting a small world moment because I would certainly heard have him play 20 years ago at a symphony concert.

“He just retired,’ George said, “and hasn’t picked up the trombone since.” 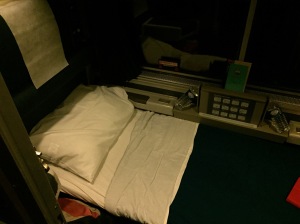 When I got back to my sleeping cabin, the porter had made the up the lower bunk, so it was to bed kind of early for me, a chance to spend a few hours with Jim Harrison’s “The Great Leader,” which he bills as a faux detective novel because the real mystery is not the bad guy that retired UP detective Sunderson pursues, but is the only mystery worth a great book and a great writer, the mystery of himself, a man my age, recently retired as an investigator and three years out of a divorce.

“No matter how much he wanted to nail Dwight committing a felony,” Harrison writes, “to do so illegally would be a curse to carry the rest of his life since he was a memory junkie and never forgave himself for anything.”

And this, about his pal – and psychological opposite — Marion: “Marion was totally without self-concern, thinking that as a human he was essentially a comic figure.”

I suspect Marion may have taken a few long-distance trains trips himself.

(Writing this in the lounge on Friday night with a Jack on the rocks and surrounded by Amish families playing cards and not drinking Jack. I feel a little sacrilegious drinking so close to them.)

I liked sleeping on a moving object, secure in my berth, knowing when I awoke I would be closer to home without making any effort. I woke up around 4 and looked out the window to see pockets of white glowing between boulders in the high California hills. Then rock-and-rolled back into a shallow slumber and got up to a red sunrise and an announcement breakfast was being served in the dining car.

Two men of heft joined me at my table, men so wide that I worried that they couldn’t get their arms free to down their breakfasts of omelets, grits and sausages. They were brothers and retired, from what they never said, and had been visiting a sister in California and travelled almost always by rail because they had the time and liked the food, which did not speak well for their taste in food, which was below average diner fare (and I like good diner grub) with the additional benefit of being served just this side of room temperature.

The oldest brother — gray goatee, glasses, 250 pounds — had one great interest that morning: to find out how much it would cost him to upgrade from a sleeper berth to a so-called bedroom, which has the advantage of having its own itty-bitty bathroom. He had made many calls to Amtrak to get an answer and finally, he said, “a girl in customer service named Julie” (turned out to be the name of the automated Amtrak voice) told him he had to talk to our conductor, who just happened to be walking by just then.

The brother told his tale, explaining he probably didn’t really want to upgrade, just wanted to find out the cost because “I don’t have anything else to do.”

Yes, the conductor said, there was time a couple years ago when he could book the upgrade, but said Julie was wrong, that authority had been taken from conductors and only someone back in Amtrak central could do it now.

“One hand doesn’t know what’s the other hand is doing,” announced our waitress and this statement, rather than annoying everyone, pleased them because it confirmed what us geezers believe — the world has gone to hell since we gave up running it.

What you do over of these long train trips is try to keep yourself occupied between meals — reading, checking the smart phone, watching the scenery — unless you are Amish. They had many friends on board to talk to and play cards with.

At lunch, I was paired again with George, the retired music teacher. George likes trains and has ridden most of them, taking trips on lines about to go defunct just so he can say he rode them. He knew the full history of rail in the 20th and 21th centuries and told it all in a slow-and-low Midwestern voice while spending an inordinate time preparing his cheeseburger and then waiting until at least the Nixon years to take his first bite and finished the treatise while compressing vanilla ice cream between his lips, which made me want to run back to my berth to see if I had any drugs that wipe out bad memories. 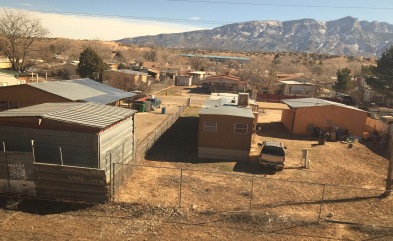 After seeing hundreds of desperate-looking homes in New Mexico – run-down trailers, tiny stucco cottages, shacks of plywood and corrugated metal, like I had once seen on a hillside in Quito — it came to me that I not seen a single human in those beat-down neighborhoods. Plenty of cars and pickups, from junks to spanking new, and the detritus of attempts at a life, like I have seen in many a Maine yard; plastic toy ‘cars’ faded from red to salmon, swing sets next to rusted appliances, but no people. So I keep a lookout for and finally saw someone, a man with a long never-trimmed gray beard and a head of wild hair to match, dressed in orange and yellow shirt and a windbreaker, walking slowing — an aged hippie, a grateful Dead fan, a believer in marijuana, likely living off disability or his old lady who worked in a nursing home. There is time on a four-day train trip to let the train wheels do the spinning rather than your thoughts and wait to see what hours of having nothing to do will produce: might be a reverie about an old hippie in the desert.

Just before dinner I joked on the phone to my wife that I bet I get stuck again with George, who admitted such was the case when the waitress led him to my table that night: “Stuck with me again.” Which did not stop him from saying things such as ‘they were going to shout down the I & O because the track maintenance was too high, but then and SJT out of Milwaukee started up a commuter service and …”

I ate my gloppy and lukewarm veggie lasagna fast, washed it down with another Jack, skipped dessert and pardoned myself while George was still doing painstaking surgery on his chicken leg. He used to take these trips with his wife, he said, but she died four years ago from cancer. That explained a lot about the poor fellow, but I had listened – well, at least was present for — three straight meals, nodding kindly. Where was the fascinating retired Joyce scholar I expected to share a bottle of Malbec with and together get melancholy over the last scenes in The Dead?

Warren Zevon’s “Nighttime in the Switching Yard” would have the right background music for passing through Hutchinson, Kansas rail yard, with what seemed liked a dozen trains holding a whistle-blowing competition. The soothing rocking of the first night was gone; now the off-kilter tracks were sending the train left and right so violently that I wished I was wearing a helmet to protect my noggin from the hard plastic moldings a few inches from the head of my bunk. Instead, I wrapped my head in a pillow and eventually normal rocking resumed and the whistle contest was down to once every few minutes. I fell asleep planning to have the continental breakfast so I could escape George before he would be even have been served his hot breakfast.

At midday on Saturday, the Chicago skyline showed up and the Southwest Chief leg of the trip was over. Time for a Chicago hot dog and fries at the station and one more night, this time on the Capitol Limited, through Indiana, Ohio, Pennsylvania, West Virginia and into DC. George had got off in Chicago and my dining mate for the remaining meals was an Amtrak official who rides the routes to talk to passenger about their experiences. Like everyone else I met, he knew a lot about trains, but he had the excuse of that being his job. The others liked trains the way I like baseball, my friend Dave likes fishing and my wife likes gardening. I just hope that I would not talk continuously about why Ricky Henderson was the best leadoff man ever to someone who thinks Fenway Park has swing sets and slides.

From D.C.’s glorious Union Station to a prosaic last leg to Boston onboard the high-speed Acela train, crowded with 20-somethings headed back home after a weekend in Washington, Philadelphia or New York.

Into Back Bay on a cold, dark night, up the escalator and the relief of seeing my Naomi waiting at the top for me. All that was left was a three-hour drive home to the middle of Maine.

One thought on “Rock ‘n’ rollin’ on the Southwest Chief”